finalizing my next book - this one on a technology few know about that saves lives and energy ...

I opted out of philosophical tailing chasing debates on FB today and worked on finalizing my next book - this one on a technology few know about that saves lives and energy - pays for itself. What else you have does that?

It will be a FREE book, with LOTS of Photo Illustrations (just like "Better Times Ahead: April Fool" - a photo can speak more than ten thousand words...). It's in a rough PDF format if anyone is interested in a peek, let me know I can will email it to you.

I love how eBooks make publishing and information sharing SO much EASIER.  ePublishing levels the playing field to give the small person a chance to be heard - not just the big name authors that publishers rely on for print editions.

Now publishing is open to ANYONE in America - or the world -- instead of the select few who could get a book printed in the "old days." Here is what I discovered about the long, complicated process to get into print before digital publishing came along. It wasn't that long ago but the change has been revolutionary.

In 1989 I was unemployed (actually "self employed" at that time was the same as being unemployed during the Great Texas Oil Bust of the mid-80's).  Since I had no ability to go anywhere and plenty of time to kill I decided not to waste it on TV but try to write a fiction book about what it was like being an international legal negotiator (like I had been doing for the Fortune 500).

All I needed was a plot. My plot turned out to be prophetic, but that didn't mean it would be published. Read on.

Being broke,  I was sitting in my apartment with an old IBM computer with probably the first "Word" program ever written. My book was a fictional "Fire Over Arabia" --the plot line was a flash war in the Middle East and a attempted terror attack on Washington DC by a Middle East group (Saddam was my bad guy, since Al Qaida didn't exist then).

When I was 150 pages into making up a storyline for "Fire Over Arabia" I was working on a chapter about my character --an international lawyer of course --being caught up in a war that breaks out around him while doing a oil deal in Iraq.  Then in reality, the TV news broke that Saddam had invaded Kuwait! Because of that book and my prior Middle East experience, I went on the local Fox station in 1991 as their Middle East expert (some of the clips are on YouTube under my name).

Two years later in 1993 was the first bombing of the World Trade Center - killed 6. The second part of my "fiction" book had become fact in two years. So "Fire Over Arabia" should be published right away, right? Not so.

After the Gulf War I set out to sell my fictional "Fire Over Arabia" - to which I had added a new subtitle "The Revenge of Saddam."  Here is what publishing was like then in the dark "old" days.

First I had to find an agent - specifically an agent that did the type of book I was trying sell. That took forever - and meant searching through books and writing actual letters with correct postage - no email existed then! Once i found an agent (who was legitimate and not someone taking an advanced fee), it was time to search for a publisher.

Again, not easy because publishers also specialize and you have to pick the right one, and that publisher wants a winner book to justify spending hard cash in year-long process-- and kill a bunch of trees-- to print it and truck them to thousands of bookstores nationwide where it would have to compete with all the other stuff on their shelves. If it doesn't sell, they are stuck.

To my amazement we did find an interested publisher, except for one thing. The publisher said: "Its an interesing book, but Saddam will be gone within a year, so we don't want to take the chance publishing it." So "Fire Over Arabia" was never published. I did send it to the Library of Congress, back when you had to do that to secure a copyright. Saddam remained in power another 10 years!

Today, anyone can publish an eBook without an agent or the blessing of the publisher. I am an author on one of the biggest bookstores of the world, Amazon. As well as Barnes & Noble. My book is in the Ipad store on Lulu. I got there via ePublishing - and no gatekeeper says "no" if the book meets their format requirements.

When I finished writing my true global adventure story eBook "Better Times Ahead April Fool" I paid an editor to correct the grammar and spelling: I paid a different person to put it into HTML format for Amazon and another for Barnes & Noble and Apple. In the updated Photo edition, she worked photos into the book.

Then I paid a cover designer for the artwork. I used a service where people submitted their designs - I picked the winner, who got paid the fee. I did this because if you don't do a good job on it, the risk of it looking like garbage is YOURS, not theirs. 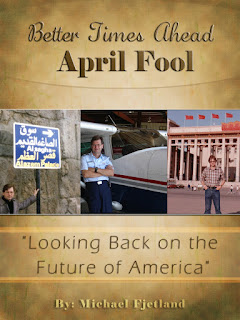 So, I will be doing it again, publishing a Free eBook that explains the technology my company Armor Glass provides. It's a tool to illustrate and explain its application and uses far better than I can do one-on-one. Coming soon. It should be under 100 pages with photos.

If you want to stay up on developments on this and other critical issues of the day impacting us Global Americans with values, click "Subscribe" or "Follow"...

Posted by Global American at 1:10 PM