Syria's MELTDOWN - When I Was There on Child Kidnapping Case 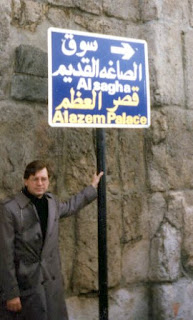 Syria is exploding. The murderous Bashir Assad, who took power from his murdering father Hafaz Assad, has set his army, along with militias, killing civilians at an increased pace.

The fact that the rebels were able to plant a bomb that killed his Defense Minister and Deputy (Assad's brother-in-law) was remarkable. It shows the power behind the opposition to a dictator that doesn't mind having his troops shoot defenseless civilians, even those that had fled to a ditch, where Assad's men shot all of them.

The photo above is when I was in Damascus in the 90's on a child kidnapping case. Assad's father was in charge then. It was weird then.

Details are in my ebook: "Better TimesAhead: April Fool?" at www.BetterTimesAheadAprilFool.com
Posted by Global American at 4:14 PM