Malaysia Flt 370: It was a Hijacking not an Accident - Here's Why

There is an overlooked fact about the mystery of Flight 370 that is obvious and that no one has raised regarding the disappearance of Malaysia Flight 370.

Why did it change course at least TWICE? Only a human could have ordered a second turn. 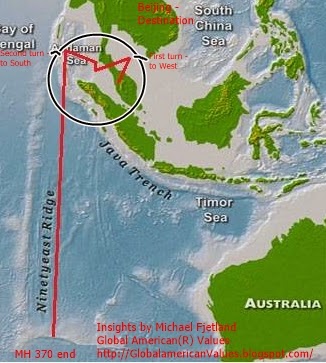 Since 1991's Gulf War I have been giving analyses on TV on global and terrorism issues based on my worldwide experience. I am also a private pilot who has flown with the U.S. Air Force auxiliary that does all the U.S. search-and-rescue missions for the Air Force, the Civil Air Patrol. At this point I believe that we are looking at human intervention -- not an accident -- that changed Malaysia Flight 370's course from Beijing to the southern Indian Ocean (pending wreckage confirmation of that fact.)

I say that based on the fact that the flight made at least two turns, not just one. Only a human could have made the second turn of that aircraft.

The media has constantly talked and obsessed about that first turn to the west. They said it could have been a turn for an alternate airport and that after the plane was put on autopilot the pilots had somehow been incapacitated and it flew until it ran out of gas. If that's the case the plane would have kept going west!

Apparently no one looked at the globe or facts enough to see that the plane made more turns after the first turn west.  It could only get into the southern Indian Ocean by making a second turn to the south.

Look at the above map. The plane flew west but had to turn south to get 1,500 miles from the Australian coast in the Indian Ocean.  If the chart is true, the aircraft made several turns, not just the first turn to the west.

As a pilot, I can say that autopilots don't make multiple changes on their own. They do what a pilot commands -- one turn at a time.

Based on this data -- and assuming that Flight 370 wreckage is confirmed to be in the area off Australia shown on the above map, then my conclusion was that a human or human beings was directing the flight from its original course all the way to its watery end.

That would make this is deliberate human act, not an accident. Stay tuned by clicking "follow" on the right for more Global American Values updates on this and other global issues that impact Americans.


Posted by Global American at 8:41 AM