Putin has endorsed Trump and Trump is trumpeting Putin's praise.

Being praised by Darth Vader isn't exactly a good thing Mr. Trump. Mr. Putin has assassinated his domestic opponents, one of them in view of the Kremlin. He invaded the Ukraine and stole Crimea. He has returned to the old Soviet Union bellowing after Russia had moderated under men like Boris Yelstin and Gorbachev, who had replaced the hardliners like UN shoe-pounding, shouting kruschev. 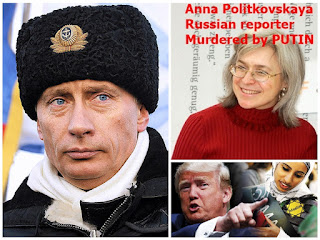 Yet Trump is so vain he basks in the glory of an endorsement from a man who flies his planes to breach borders and causes chaos instead of fixing things.

Now he (Trump) says that Putin is "respected more" than the American President Obama, who inherited the worst economy in 70 years from GW Bush and two (2!) unpaid for wars. Yet is was Obama who not only saved the ship despite determined GOP sabotage from day 1, went on to put in place improved healthcare access for Americans, stopped Iran from developing a nuclear weapon, signed a global climate framework to start lowering carbon emissions so desperately needed by a planet on the path to environmental suicide.

While Putin has started wars, Obama has been doing the American thing of trying to end the ones we were in--not create new ones. So praising Putin is like praising Hitler's cleverness in having one-party news touting phony facts for the public with no opposition Congress that Obama has had to deal with. In Russia, openly opposing Putin is a death warrant, not democracy in action.

We need a president in 2016 who bridges the multi-racial, multi-religion country/world in which we live - both here and aboard.   American Presidents act with respect to build bridges, that's what we Americans do (like the Geico commercial).  We don't need white supremacy gang leader for president, who plays footsies with tyrants and hurls insults at everyone, even encouraging supporters to beat and hurl racial insults at protesters at his events, and cannot pull himself away from the mirror mirror on the wall (who is the fairest of them all?)....

America needs a new vision to win. Mr. Trump is blind, deaf and dumb. If America picks that road, we betray what our founding fathers left us.  America is a nation of many colors and religions living side by side in peace. Let's not fall into bigotry, ignorance and fear promoted by snake oil salesmen.