The fish are really jumping this morning in Clear Lake. They don't always do it but today has been active --maybe it's the change in the air brought on by soon-to-be Hurricane Alex.
The sky has a different look from the usual summer haze. The air is a crisp blue and towering clouds are building. A brief torrent of rain hit about 3 a.m. - fortunately I had brought in the balcony TV or it would have been soaked.
Business is booming. People always wait until the train is coming before deciding to act. It's a good problem to have, considering the alternative. I still remember having nothing to do during the Texas 80's bust.
Yet being offline can be beneficial in ways you can't imagine. I'm still careful about what I spend and it was during the 80's and 90's downtime that I first developed a fiction manuscript about a potential terrorist attack on the U.S. That is what led to doing TV appearances as a terrorism analyst. And all that led to setting up a green company that provides protection for people and their property.
Standby for a wild week with Alex. I will be in my car office constantly this summer/fall...You can follow those activities from our new Armor Glass blog: http://armorglass.blogspot.com/
Posted by Global American at 5:18 AM No comments:

A Whale of a Skimmer - Should Be An EPA No-Brainer 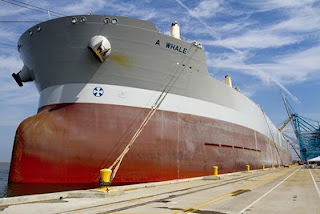 It's a "whale" of an oil skimmer - over 200 times the size of the puny boats battling millions of gallons of crude in the Gulf of Mexico, and it's a new invention.
Yet the EPA has to "study" whether we should allow it to be used in the Gulf of Mexico. Are they crazy? How could anything designed to take more fouling oil out of the Gulf be anything but a godsend at the moment? What is there to "study"?
This is the problem today - America has fallen behind on technology and common sense seems to be missing in action. If this giant machine invented by a Taiwanese CEO does anything it would help - so why the red tape?
America needs to become a technology player again - our skimmers and booms are jokes. It was an Asian with the big idea that looks like it is a better way to clean water than the flyspeck boats we have been using.
Here is another example. An American company has invented a machine that will pull the oil from the sand using microbes to return clean sand. It can do miles of beaches a day. Yet the governments in Louisiana won't commit to it, afraid BP won't cover the $25,000/ day it costs to operate. Instead, we have thousands of people standing around in the heat with plastic bags and shovels fighting millions of gallons a day - how ridiculous is that.
Is that another joke or what? You might as well invite another million illegal immigrants to help out since it will take a lot more people with shovels to fight this kind of war (See my point?). It's not a winning strategy against mountains of toxic oil.
What has happened to American technology leadership? We spend trillions on oil yet little or nothing on these novel ways of cleaning our fouled waters.
Worse, local and national governments put up roadblocks from using these new technologies that could save our spoiled waters and beaches. Our major companies have ignored the inventions of our American and global entrepreneurs that could solve this problem. Even actor Kevin Costner has an invention that would separate oil from water - but BP was as sluggish as the government in adopting it.
Our Fortune 500 companies often act as ponderous and stupid as government bureaucrats who have to "study" whether a giant oil skimmer from Taiwan would pose a bigger threat than millions of gallons of spewing crude oil.
How long should that take to approve? Yep. No time - ESPECIALLY with tropical storm ALEX already our first tropical storm of 2010 - ahead of the "normal" hurricane schedule. We don't have time to waste.
If America is to lead, we have to do better than this. This an opportunity to upgrade our technologies on a number of levels. Let's start with a "Whale" and use our entrepreneurs that have new technologies that can address these disasters.
We can't get there using yesterday's know how.
Posted by Global American at 1:31 PM No comments:

I am hearing strange news - that people are blaming the BRITISH people for the BP disaster in the Gulf of Mexico. Nothing could be more stupid.
BP is an OIL COMPANY. It is not the British public. Like more than a few American oil companies it has had a loose attitude towards safety. The problem is the oil company attitude's, not the English people, who have no control over what a company negligently does than President Obama.
So, to blame anyone other than BP is wrong, and just another sign we have fallen into this mindless bigotry of blaming other countries when something goes wrong. Not right. And not cool...
BP's problem is entirely BP's. They have acted with arrogance and stupidity.
Our Government officials have studied more than acted, even when it came to no-brainer decisions -- like adding sand berms to protect bird sanctuaries from oil.
I'm not impressed with anyone in this disaster. We need more action and less bull shit.
Posted by Global American at 4:16 PM No comments: