Did you know Gov. Perry has been traveling the world - To look smarter than Cruz? Might work!

Somehow the GOP has the bizarre idea that investing NOTHING will magically make us lead the world. Potholes will fix themselves. Old rail will somehow hold up under massive traffic.  Investing in Positive Train Control to keep trains from crashing is not much of a priority.

Congress and some people have this magical idea that trains are supposed to "pay for themselves" when neither roads or airports are profitable. They are just things we NEED to get from A to B.

I have ridden the fastest train in the world in China. I have used the Euro rail system. Congress' lack of investment in AMTRAK and advanced rail is beyond STUPID. It's holding America back!

The biggest problem today is that everyone is an expert on Everything. Have you noticed that?  People don't accept expertise as knowledge worth listening to versus their sources of information--usually a TV or radio jock who has hardly been outside our borders or some bogus article written by a guy with a tin foil hat that they found on google! LOL.

If I never got off that Iowa farm before going around the world on  legal missions like the Syria child kidnapping case and selling pollution control technology to China, I would be CLUELESS how the real world works. If you have not traveled to China and taken a tour, you have no idea. After being in over 50 countries I went to Norway for the first time. I thought I knew all about it from what I read. When I got there, I realized that I had no idea.

Yet we elect Senators like Mr. Cruz who have no such experience.  I saw not only today's China and dozens of other countries, but i saw it as a young man over 30 years ago. That makes me one of the few who can testify to the changes. And how they think.

Even Gov. Perry has been traveling to a number of countries to get some kind of international knowledge (you didn't know that did you?) Texas taxpayers paid for his security costs on those trips. They paid NONE of mine, since i travel globally without security. It does give him a leg up over the Presidential candidates who think Burundi is wine, or that Jesus was white when all the people I saw in my Middle East trips were Arabs or Persians.

Our Congress should be playing a global strategy for America to get back to No. 1 again. it's not even awake! LOL. If we elect more reps like them, we will totally throw away the legacy of our forefathers and become second rate has-beens. I don't buy that.

Here is a roadmap to get America back on the real track to global success..."Agenda for American Greatness" 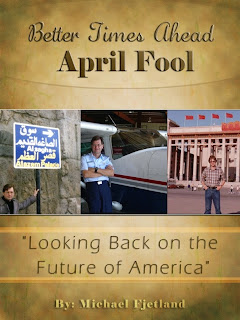 The unfortunate wreck of the AMTRAK train brings up something that Americans should discuss - the dismal state of our technology versus the world in transportation.  America now ranks as the 12th WORST country in the world in INFRASTRUCTURE.

If the world is the Kentucky Derby, America's horse is coming in last.

If you don't believe me then look at this photo comparing our technology with the world. 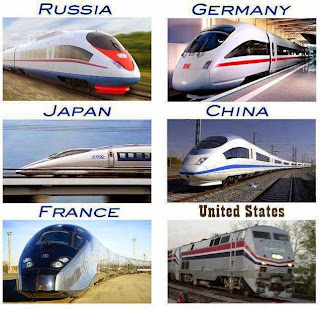 The AMTRAK train derailed at 100 miles per hour.

When I rode Amtrak once from Houston to New Orleans we rarely got to 60 miles per hour. It was so slow I could stand by an open door and take photographs of the passing country. The journey took 8 hours - two hours LONGER than you can drive it.

At one point we stopped in the middle of no where - a car had run out of diesel and passengers were moved to other car. When we slowed to go over a bridge next to New Orleans, the cars rocked back and forth so much I was terrified that we would fall into the water below. That was in the late 70's.

Not much has changed to train service outside the Washington-NY Amtrak corridor. (Even at that, trains are 17 times safer than cars).  When I went to Europe on business, their rail was way ahead of ours.  European trains routinely travel high speed up to 200 miles per hour!   And that is steel-on-steel. The Chinese have trains that use magnets instead of steel to reach staggering speeds without worry of derailment.

The Chinese MagLev doesn't even touch steel rails as it hovers on magnets--hits 265 miles per hour!  Japan has tested a new MagLev system that has hit speeds of 300 miles per hour!  Poor Amtrak isn't even in the horse race. 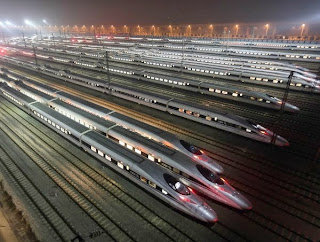 Chinese Bullet Trains...just some of them 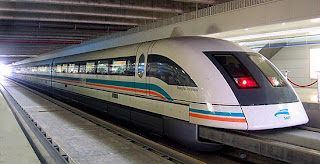 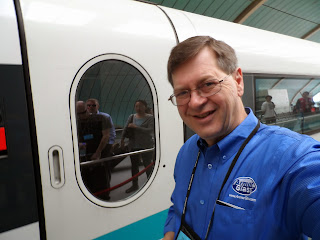 
Yeah, yeah, trains don't make money. Neither do roads or airports, but we have them anyway.  Right? Unless we get cheap flying cars we will need that high speed rail. Elon Musk of Space X fame is considering a thing called the "Hyper Loop" - an underground high speed rail.

Frankly, the LOOK of our trains is embarrassing - they remind me of trains I saw in China way back in 1982! Is that American leadership? Check out what it looks like inside a MAGLEV at 265 miles per hour (video by author).

Stay tuned here for updates.  Pass it on!
Posted by Global American at 4:45 PM 2 comments:

Opposing trade agreements -- and not having them -- actually COSTS JOBS

America hardly has any tariffs (except on sugar which is stupid because other countries can produce it cheaper than we can, so your sweet tooth gets to pay more as a result.)


Trade agreements get other countries to CUT their tariffs (basically it is a tax on our products) that they impose on our products which are (made in the USA and) imported into their countries. That cuts our costs and makes our goods more affordable.

It takes a trade agreement to get other nation's tariffs REDUCED. Cutting their tax on our products makes ours more competitive with their local companies.

I know because I have worked it personally in over 50 countries, as a legal negotiator (as documented in "Better Times Ahead April Fool").

Opposing trade agreements -- and not having them -- actually COSTS JOBS if you read the examples in my blog entry at this link. 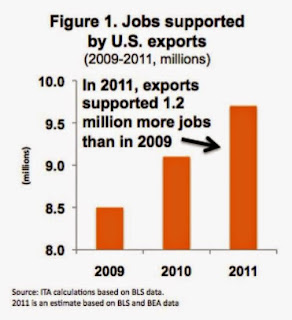 Posted by Global American at 2:03 PM No comments: