Dear Iowa, As a former Iowan please do this on Election Day...


I was born in Iowa and my mom still lives in Mason City, so I have a vested interest in this election.


First of all, let be me clear that this election will make a difference in your life when candidates are discussing doing away with guaranteed access to healthcare and social security -- or starting another war with American boots on the ground.

Frankly, the GOP side seems to have gone totally insane in a contest of who can be the bigger bomb-thrower and hate-monger, so I will stick with the Democratic side.


Unlike many of you, I am old enough to remember past elections when democrats nominated a person George McGovern in 1972 and Walter Mondale in 1984, each of whom lost by a landslide because Democrats picked the most liberal candidate.  The old adage is “Those who do not remember history are doomed to repeat it.”  I was where college kids are today, voting as a senior for the first time in 1972 - and seeing the consequences.


I like Bernie Sanders but polls show that anyone who calls himself a “socialist” has lost 50% of the vote off the top. Secondly, while I like his proposals there is no way to pay for them nor get them through a GOP controlled Congress. It’s all pie-in-the-sky.  The GOP will hit him with their smear machine and like McGovern and Mondale, it will be another “snatching defeat from the jaws of victory” moment for democrats.


I encourage thinking Democrats to vote for Hillary. She is the only candidate with the global skills needed by a President.  I know this since I have negotiated in nearly 50 countries while she has been in over 100. The presidency is no place for on the job training by amateurs. It is challenging even to those with experience, since no one controls the unexpected. She also is a fighter for the middle class.


So, I encourage a vote next Monday for Hillary Clinton, a sane candidate in a year of crazy candidates who plunge America back into the policies favoring the 1% and fiscal nightmare that led to the crash of 2008.

13 Hours - How it was a local CIA Station Chief, not Clinton or Obama, Who delayed a Rescue...

I Just saw "13 Hours" about the Benghazi attack.

EXCELLENT. APOLITICAL. It sticks to the FACTS.

I did NOT see it as a hit piece-- I say that as a supporter of Hillary (I like Bernie but am supporting Hillary who has the global expertise required).  It shows what's its like to be in a de-stabilized country. It looked authentic to me, since I have been in de-stablized countries (once flying into Thailand a day after a coup and being in Syria) described in "Better Times Ahead April Fool' )...

One of the Benghazi survivors, "Tig" confirmed on Fox News that it was the CIA station chief in Benghazi who said "stand down" - NOT Clinton or Obama.

That CIA chief is probably the reason the ambassador died of smoke (not bullets.)  I have been in that part of the world. Once things fall apart communication with the rest of the world gets difficult and complex fast.  In the old days a phone call out of India would take me 4 hours. It takes hours to travel into these areas.

Final take-away: It was LIBYANS who rescued them in the end. That should tell you that not all Libyans are bad guys...duh.

The problem was telling who is who - who were the bad guys. Notice our guys didn't just shoot everyone outside the compound!

if we had a mass of people running the streets carrying AK 47's (in their case, all looted from Col. Qaddafi's armory after his fall), how would we know who was a good guy or a bad guy? Right? No one has a uniform.

P.S. As a person who spent 911 on TV as a terrorism analyst, the one thing it does miss and downplays too much is that there WAS an Inflammatory VIDEO released at that time by an American religious zealot that WAS meant to cause this kind of adverse Islamic reaction. The timing was the worst.

In fact, since i follow this having been there, it did cause, Muslim reactions and protests as far as Egypt. It was a word grenade that played into Al Qaida's hands.  Amb. Stevens paid the price as a 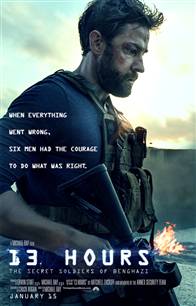 result of religious intolerance and ignorance on BOTH sides.

These 6 guys are HEROES for what they did: 6 standing up against 30-40-50, all armed with the same heavy weapons.

Who was worthless in the fight? The CIA staff, kids from places like Harvard who basically stood there, useless in fixing the mess they were in....Go see for yourself.

Being the U.S. President is no place for arrogant bombast from a Trump or a Cruz. It takes knowledge. like these guys did when the chips were down. Even the experts can find ourselves in tough places like Benghazi. Imagine how an amateur would screw it up.

These guys weren't amateurs, and it wasn't them who screwed up. They were Americans protecting Americans, working with our foreign national allies, who in this case were Libyan....We all get by with a little help from our friends, not alone.
http://money.cnn.com/2016/01/12/media/13-hours-secret-soldiers-of-benghazi/index.html
Posted by Global American at 2:41 PM No comments: