It's not about black versus white; it is about the tolerant versus the intolerant

After this week's shootings here is how I see it - because its not about blacks versus whites, as some say. 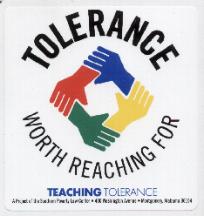 It's about those who respect others and those who don't. (Racism is a lack of respect).
It's about those of us in each race sex and religion being tolerant, versus those who are intolerant and disrespectful towards others.
It's about those like Hillary who speak respectfully, as head of a diverse party of like-minded people of all religions and colors, versus the hate speech and overt racism that led voters in a mostly aging "whites only" party to pick Donald Trump, who is disrespectful of all and a generator of hate.
The choice is between an inclusive party that looks like America today and its future -- versus a "whites only" party, a mostly aging, angry, low skilled whites (especially primary voters) who loved to hear Trump's hate speech. They loved his promoting violence against protesters at his own rallies. They are not what our diverse America founded on "all men are created equal" is all about.
So which presidential candidate and party looks like America or its future?
Who speaks with respect and seeks solutions instead of being on both sides of the issue at the same time and is ignorant of our own constitution?
Easy answer. Women have always acted better than men in communicating instead of insecure hate mongering. The Democratic party includes all people, straight and gay, Christian, Muslim,  Jew, Buddhist and beyond.  The GOP rejects people who don't look like them. Trump has feed off it and been a divider, not a uniter.

ISIS feeds off the Trump's who try to make this a religion war.  Picking Trump would boost ISIS and PUTIN.

Michael Fjetland, Author
Better Times Ahead April Fool
Posted by Global American at 10:30 AM No comments:

American values that made this country great are under attack by the first presidential candidate in history to make racism a central plank of his campaign -- starting with his statement that Mexicans were "rapists" and "some, I assume, are good people."  After attacking minorities, he went on to disrespect women, when he wasn't bragging about the size of his sexual organ (somehow connected to your hand size). 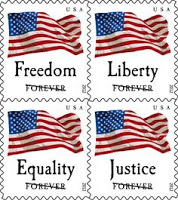 He called women "fat pigs" and said Megyn Kelly had "blood coming out of whatever."Lying Ted" and "Little Marco" is now "Crooked Hillary." Is this what you consider "presidential"!?

Then it was Muslims. When Hitler started it was the Jews. I see no difference between his hate towards Jews and Trumps painting all Hispanics and Muslims as bad people. Trump even pretended not to know who the Ku Klux Klan was; then encouraged violence against protesters at his rallies.

This is one sick bastard who inherited wealth, never faced a day having to chose between food for his family or paying the rent, making phony promises of making our country "great" again - by being a bigoted, sexist promoter of violence and racism.

If his followers think he can bring back coal jobs when natural gas was the killer, or bring back American greatness by inciting attacks on minority Americans, they need to invest $35,000 into Trump University today (never mind the same info is in his $20 book).  They need to ask why he has not revealed his tax returns as every other presumptive nominee has, and why they think he should be immune from following the rules everyone is does?

This is the first election where the choice is between black and white. It is between the real elite - the inherited wealthy like Trump was born rich and whose tax plan would favor the 1% even more and run up another $11  TRILLION in debt.

The other choice is the daughter of a small businessman and her housewife mom who inherited nothing. Dad didn't give her a "it was only $1 million" loan Trump claimed his father gave him. She bootstrapped her way up, just like other Americans

It is between a candidate whose entire campaign has been based on getting votes by racism and gutter talk, name calling and disrespect of one group after another. The other candidate's campaign is entirely based on offering solutions and speaking in respectful dialogue on improving jobs and the economy instead of trash talking street bully language.

Our Declaration of Independence states: "All Men (and Women) are Created Equal"

Our Bill of Rights includes the 1st Amendment that addresses both free speech and treats ALL religions with equal respect.  It reads:

"Congress shall make no law respecting an establishment of religion, or prohibiting the free exercise thereof; or abridging the freedom of speech, or of the press; or the right of the people peaceably to assemble, and to petition the government for a redress of grievances."

That means that Muslims and Jews are free to practice their religion. We don't have religions dictating laws. We don't have Sharia law or any state religion dictating how people dress, work or play. When our first immigrant forefathers came to North America, it was to flee England's monarchy rule and its state religion. The "Church of England" was picked by a king, not its people. When our forefathers set up camp, having the right to practice your religion without interference was a high priority.

Mr. Trump endangers our 1st amendment rights to a free press which we take for granted. He has "banned" certain news organizations from attending his rallies, such as the Washington Post, because he didn't like what they wrote. Its not the first and won't be the last. That is classic Fidel Castro and Putin - who eliminated Russia's independent press soon after he was elected. Who is to say his friend Trump would not do the same since he is so thin skinned about press criticism.

Never in history has a party nominated a candidate so flawed, bigoted, ignorant and consumed with his own self. When "Brexit" -- the biggest event in a half century hit the UK as Trump was visiting his golf course in Scotland  -- all Trump could talk about was how the crash of England's currency would help his golf course and his pocketbook. Not a word about the damage to ordinary people.

He was clueless that Scotland, where he was standing, had voted in mass to remain in the EU. Trump and Putin both wanted them out of the EU - unbelievable for an American president to want what a dictator desires!

America has always been special because our nation was founded on equal treatment and respect for all --a justice system with a jury of peers designed to not favor the rich over the poor. It wasn't based on labeling various ethnic groups and religions as evil. Hitler did that. Americans fought that.

Global American Values takes those American values of equality, justice and fairness and applies them on a global scale - that's how we win the battle of ideas in the world. Not by following a foul mouth candidate who was born rich and whose opinions change by the minute depending on whether it will yield votes or not.

We don't need a president who pretended to be his own press agent who called the press to brag about cheating on his wife with multiple women at the same time. Trump is a candidate suitable for school yard bully scum, but not president of the United States.