Trump has called for Bernie to run as 3rd party candidate, so Trump could win by splitting the vote on the left. Very clever, but Bernie says he won't run as 3rd party (since he can gain more by influencing the Dem platform).
Now it appears Libertarians will field a candidate, possibly former GOP Governor Gary Johnson, which could steal from Trump. Polls say 45% want a 3rd choice, so Libertarians are the only 3rd choice on all 50 states.
This could be 1992 all over again, where a Clinton won a plurality to win the prize. Stay tuned. Libertarians make their choice final next weekend. Johnson made some interesting comments on guns, etc.
BTW, I was ran as an independent and was approached by the Libertarians (story in www.BetterTimesAheadAprilFool.com) but I couldn't go with their platform. frankly it reminded me of Somalia, where no gov't means chaos.
On Friday, I dropped a copy of "Agenda for American Greatness" (at the link) with the Hillary staff at the fundraiser. If they need vision, as one of the talking heads said on TV today, they can find it in that chapter.
BTW, We weren't fat cats at the Hillary fundraiser- I met retired teachers, professional women, etc in the back of the tent. lol. I wouldn't have done it if I didn't see how important it is to have someone as president who isn't a poor role model for our kids who acts as the boss-from-hell bigot loudmouth insulter-in-chief who is clueless about the world.
Inherited wealth does not equal global knowledge. No global skills are required to say "Hey, go get me some shirts from China to sell here at inflated prices for suckers. I know, because I was the young American negotiator in China, selling American products to China which actually creates the jobs HERE in America! (the OPPOSITE of Trump)....(story at the link). 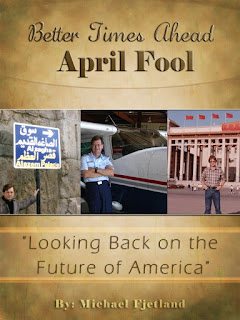 Posted by Global American at 9:53 AM