With Trump being presumptive nominee this is appropriate.

Sixteen years ago (2000) I ran in the GOP primary for CD22 in a bid to oust Tom DeLay at the height of his power, so I got to see it from the inside. In those days the Democrats made up only 1/3 of the district so running as a D was no threat. Running against him in the GOP primary WAS a threat due to the low primary voter turn-out. Once you won the primary, the general was a lock -- the November voters really had no influence on the outcome.

It was a conservative party even then, and DeLay used pushed polls and negative campaigning (spent over $1 million) even though he was assured of a win. Even my signs like this one disappeared in the night.  Primary voters are the most extreme, very different from those who turn up in November.
Today's GOP has gone off the deep end from what I saw in the 2000's --now favoring a man who threw out the "dog whistles" and code words used by politicians and ran an overt sexist, racist campaig. It is now the party of George Wallace aka Donald Trump.
I left it permanently after DeLay resigned in 2006 (mission accomplished!), even running in the 2014 Democratic primary for U.S. Senate. 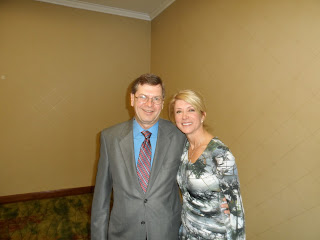 The difference between the parties is night and day. Whereas the Republican functions were almost always 99% all white people, I found the Democrats to be a diverse group of all colors (whites included) and religions that looks like America looks, with the common focus on helping the middle class and the poor. The GOP had turned into a religious party pushing ideology and focused on the 1% and their special tax deals no one else gets. Now it has become the party that nominates a clueless billionaire who inherited wealth and a foul mouth that disrespects everyone, even the disabled are mocked.
I wrote about my experience with the GOP, the gerrymandering of districts to prevent a November election from having meaning -- and how we "fix" the system in the chapter "Predicting 911 and Running Against the Hammer."  The book costs less than a Starbucks coffee. If I could survive what I did, then anyone can survive their falls.  If anyone deserves a fall to see what its like to be a woman, Hispanic or minority, its Mr. Trump, who didn't know what the "nuclear triad" meant or how to pronounce "Tanzania" and tried to put money on the communion tray, being so familiar with the world that he is (not). lol.
We know live in an inescapable global high tech economy. It is no place for bigots or student candidate who never cracked a book on the world, substituting bigotry and bluster for experience and insight.
Michael Fjetland, JD/BBA
Author
Better Times Ahead April Fool
Global American Values blog

Posted by Global American at 7:41 AM