When I endorse a President (or other office seeker) its not because I spent my life as an accountant, although I have an accounting degree.

It's not because I spent my life as an attorney, although I have a JD with honors and practiced law for decades.

It's because I also negotiated globally and I see the world as it is, not as I might imagine it to be if I had never left Iowa or Texas while doing my job. Why does that matter? Because even Reagan was stunned and admitted that he was amazed how much of the presidents job was foreign affairs. It's complicated folks.


Other countries are not as simple as what you read about if you haven't been there and death with the unwritten rules and cultural nuances. I was in China in the early 80's selling American technology, which created jobs HERE. On the other hand, Trump had people buying his shirts from China, creating jobs THERE. BIG difference!

From that experience I see which candidate's platform will really advance America which faces global competition in an inescapable high tech global economy. The roadmap is laid out in "Agenda for American Greatness" at the link.

It is based on the bizarre global 'Alice in Wonderland' experiences described in "Better Times Ahead April Fool" at the link.

Only 1 presidential candidate has more global experience than I have, shocking as that may sound. One candidate will advance us. The other will destroy us. Check it out at:
www.BetterTimesAheadAprilFool.com 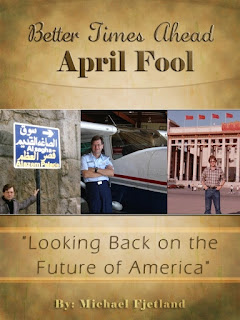 Posted by Global American at 5:10 PM